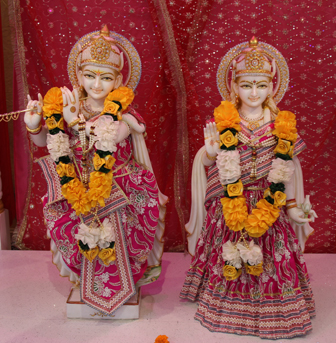 Radha Krishna are collectively known within Hinduism as the combination of both the feminine as well as the masculine aspects of God. Krishna is often referred as the original or absolute manifestation of God. Radha is Krishna's supreme beloved. With Krishna, Radha is acknowledged as the Supreme Goddess, for it is said that she controls Krishna. It is believed that Krishna enchants the world, but Radha "enchants even him. Therefore she is the supreme goddess of all. Radha Krishna".

Krishna's name comes from the Sanskrit word Ká¹á¹£á¹a, which means "black", "dark" or "dark blue". Sometimes it is also translated as "all-attractive", according to members of the Hare Krishna movement. He's also commonly called Mohan "enchanter", Govinda "Finder of the cows", or Gopala "Protector of the cows". Radha's most common name variation, Radhika, means she whose worship of the Krishna is all powerful. She embodies supreme focus and mental clarity and is the incarnation of the goddess Lakshmi. She's the embodiment of beauty, intelligence and good fortune.