Shivling with Nandi and Shiv Parivar 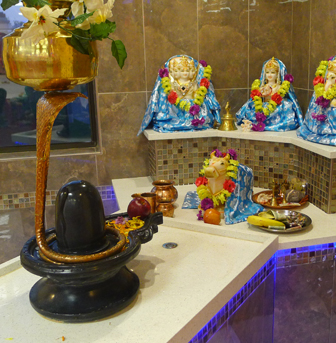 Lord Shiva Ji is recorded in the Shiva Purana as appearing between Lord Brahma and Lord Vishnu when fighting at the beginning of time as an unending pillar of light. After the fight was resolved, Lord Shiva emerged from the pillar of light and there was a black stone Lingam, oval shaped. Lord Shiva announced there that this was his eternal form and should be worshipped by all his devotees.

Indeed, the earliest civilization in the world at Mohenjodaro and Harappa sites in India contain the Shiva Lingam, and it was worshipped by our Hindu ancestors there. The Shivling, the black stone is said to be 'Svayam-Pragat' - self manifested in the river Narmada in India. The Shivlings taken from that river need no formal Pratishtha rituals as we are promised by Lord Shiva that he resides in them specifically, just as Lord Krishna resides in the Shaligram of the Gandaki river.

That stone is then placed in a 'Jalahari' pedestal. The pedestal allows a controlled run-off of the water used in Pujas. It represents Parvati Maa, and together the Shivling and Jalahari represents the union of the doer and the energy which is responsible for action in creation.

Hindus bathe the ShivaLing with water in a process called 'Abhishek' as when Lord Shiva drank the poison produced at the time of creation, he started to get overly hot. So Ganga Maa showered her waters on his head, and the demigods all offered water from the sacred rivers to cool him. This is immensely pleasing to Lord Shiva as revealed in the Puranas. When installed in a Mandir, the Shivling is worshipped together with: