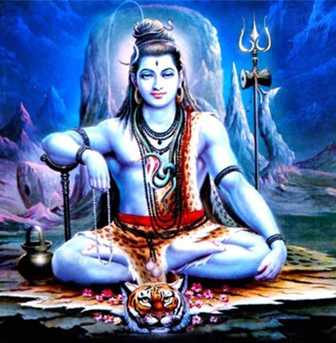 Shiva is the god of the yogis, self-controlled and celibate, while at the same time a lover of his spouse (shakti). Lord Shiva is the destroyer of the world, following Brahma the creator and Vishnu the preserver, after which Brahma again creates the world and so on. Shiva is responsible for change both in the form of death and destruction and in the positive sense of destroying the ego, the false identification with the form. This also includes the shedding of old habits and attachments.

All that has a beginning by necessity must have an end. In destruction, truly nothing is destroyed but the illusion of individuality. Thus the power of destruction associated with Lord Shiva has great purifying power, both on a more personal level when problems make us see reality more clearly, as on a more universal level. Destruction opens the path for a new creation of the universe, a new opportunity for the beauty and drama of universal illusion to unfold. As Satyam, Shivam, Sundaram or Truth, Goodness and Beauty, Shiva represents the most essential goodness.