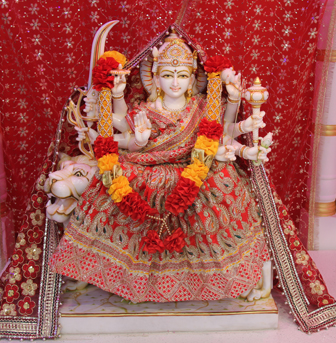 Durga is an incarnation of Devi or the Mother Goddess, a unified symbol of all divine forces. Durga is the wife of Shiva.

The Hindu Goddess, Durga, manifested when evil forces threatened the very existence of the Gods. To destroy these demons, all gods offered their radiance to her creation and each formed part of Durga's body. Durga also obtained very powerful weapons, such as the chakra from Vishnu and a trident from Shiva.

The name "Durga" in Sanskrit means "invincible". The syllable "du" is synonymous with the 4 devils of poverty, sufferings, famine and evil habits. The "r" refers to diseases and the "ga" is the destroyer of sins, injustice, irreligion, cruelty and laziness.