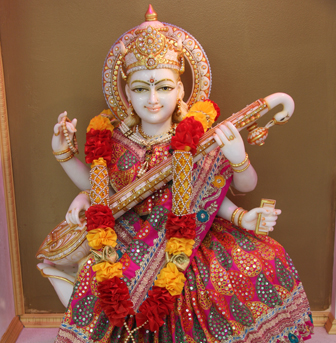 Saraswati Maa is the Goddess of knowledge and wisdom. The Sanskrit word sara means "essence" and swa means "self". Thus Saraswati means "the essence of the self". Saraswati is represented in Hindu mythology as the divine consort of Lord Brahma, the Creator of the universe. Since knowledge is necessary for creation, Saraswati symbolizes the creative power of Brahma. Goddess Saraswati is worshipped by all persons interested in knowledge, especially students, teachers, scholars, and scientists.

In order to create the world and produce the human race, Brahma made a goddess out of himself. One half was woman and the other half was man. Brahma called the woman Gayatri, but she also became known by many other names such as Saraswati.